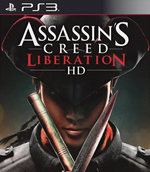 The year is 1765. While the seeds of the American Revolution are being sewn in Boston and New York, Spanish forces in the South plot to seize control of Louisiana for the Templars, threatening to forever shift the balance of power in the New World. As Templars secretly take hold of the slave trade in New Orleans, Aveline de Grandpré, an assassin of mixed French and African heritage, stands ready to defend her people. She soon finds herself on an unforgettable journey that will take her from the crowded streets of New Orleans to voodoo-haunted swamps and ancient Mayan ruins.

Jeuxvideo.com open_in_new
37 Ratings
7.20
This game has not been reviewed. Be the first to review it!

8.00
Dave Payerle—Jan 31, 2014
For series fans who missed it on the Vita, it’s a solid choice on consoles. Players looking for the full Assassin’s Creed experience will be better off with Black Flag, but anyone looking for a more streamlined, less daunting game will find a lot to like here.
open_in_newRead full review

6.50
Richard Walker—Jan 20, 2014
Boasting a strong female heroine in Aveline, Assassin's Creed: Liberation is worth the asking price, but only just. The fragmented story was excusable on PS Vita, but on PS3, Assassin's Creed: Liberation's myriad cracks and flaws are glaring. Aveline may be a thinly-drawn character, but she's one that's deserving of so much more than this.
open_in_newRead full review

6.00
Miguel Concepcion—Jan 23, 2014
Judging by the quality of the cutscenes, developer Ubisoft Sofia aspired to the latter but ended up with the former. The time and care it put into those cinematics is obvious, so it's disappointing that the gameplay and its bugs--issues that existed in the Vita version--didn't receive the same level of attention. I still recommend Assassin's Creed: Liberation for fans of the series, but it's hardly worth revisiting if you've completed the Vita version.
open_in_newRead full review
See all critic reviewsarrow_forward