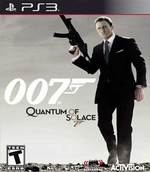 The game begins with James Bond kidnapping Mr. White, a member of the previously unknown criminal/terrorist organization Quantum. While he and M interrogate White, they are attacked by the traitorous MI6 agent Henry Mitchell, who is killed by Bond while White escapes. Later, Bond spies on a meeting of Quantum members and photographs them; among them is Dominic Greene, a well known environmentalist.
open_in_new Wikipedia

This game is brilliant! Me and my cousin played it on XBox and I am going to download it on Playstation 3. I recommend everyone to download it on whatever console that they have. I hope it is free, because I really want to play it.

By the way, my gamer and online ID is gwilty-2005. Send me a freind request when you get the chance!

7.60
Jonathan Marx—Nov 04, 2008
Quantum of Solace won't be up for any "game of the year" awards, but it is a solid title that offers a satisfying, though elementary, single-player campaign and a strong, but perhaps niche, multiplayer experience. It's not a total return to form for the Bond franchise, but it seems to be headed in the right direction.
open_in_newRead full review

6.80
Nate Ahearn—Dec 16, 2008
Quantum of Solace isn't the game that it should have been. It's not bad by any means, but what brings it out of the pits of despair is the foundation of a much better game that we all know and love. The action is less compelling and the world that's built around Bond doesn't do much to enhance the fun factor. All of the additions do nothing to push the game ahead of other first-person shooters and instead take you out of the world of being Bond.
open_in_newRead full review

6.50
Andrew Reiner—Sep 22, 2009
Bond has had a tough stretch in video games, and Quantum of Solace isn't a step in the right direction. The gameplay shows potential, but the rest of the game isn't strong enough to lift it up into an experience that any gamer needs to see.
See all critic reviewsarrow_forward

The History Channel: Battle for the Pacific