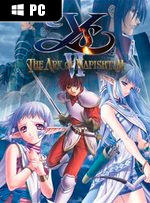 Red-haired adventurer extraordinaire Adol Christin has finally reunited with his best pal, Dogi, and is eager to set sail for new adventures in Afroca. It seems fate has other plans for him, however, as a pirate captain named Ladoc makes him an offer he simply can't refuse: a chance to explore a dangerous, uncharted archipelago in the Atlas Ocean that may hold treasures of heretofore unseen value.

Never ones to back away from a good mystery, Adol and Dogi both agree to join Ladoc on this expedition aboard his ship, the “Tres Mares” -- but no sooner does it weigh anchor than the Romuns, their sights set on the same curious islands of Canaan, attack the wayward pirates and ultimately knock Adol overboard, leaving him for dead.

Jeuxvideo.com
3 Ratings
9.00
This game has not been reviewed. Be the first to review it!

8.50
Kevin Sanchez—May 07, 2015
Ys VI: The Ark of Napishtim is quite the action RPG and worth a try, even for those like myself who have no previous experience of the series. Despite the two glitch issues I previously mentioned (which hopefully get patched out soon), as well as the lack of truly involving plot, Ys: VI is still a very solid JRPG gameplay-wise and worth every penny on Steam.
open_in_newRead full review

8.00
Emily Speight—Apr 28, 2015
Overall, Ys VI: The Ark of Napishtim is a solid effort. It’s certainly nothing new and wouldn’t have been revolutionary when released, but it’s still a lot of fun to play. Some gameplay elements haven’t aged well, but others demonstrate that you shouldn’t fix what isn’t broken. A must for Ys devotees and JRPG fans.
open_in_newRead full review

8.00
James Galizio—May 19, 2015
Overall, regardless of whether this is your latest Ys adventure, or even your first one, you could certainly do worse than picking up Ys VI. For fans, it'll probably seem a little less polished than later titles, but for both newcomers and veterans alike, there's a lot to love here. As a starting point for getting into the series, Ys VI makes sense, and for a returning player it's a no-brainer.
open_in_newRead full review
See all critic reviewsarrow_forward