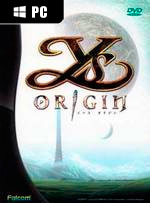 Set 700 years before the first title in the Ys series, the Ys Origin's story focuses on the twin Goddesses and the mysterious Black Pearl made famous in Ys I & II, and follows the adventures of several playable characters as they ascend the menacing Darm Tower.

Players select from one of three playable characters, each with their own unique storyline and vastly different style of play. After the Story Mode has been completed the real challenge begins as players test their mettle in Time Attack, Boss Rush and Arena Mode. Falcom's much-lauded Sound Team JDK is back once again to provide the hard rocking music that players have become accustomed to hearing as they take on the brutal old-school platforming and puzzle challenges that the Ys series is known for.

Jeuxvideo.com
9 Ratings
8.00
This game has not been reviewed. Be the first to review it!

7.10
Richard Cobbett—Sep 11, 2012
As with Felghana, Origin's age definitely shows – but the restricted setting feels more self-assured, and it's much easier to slip into the world via its new characters. As long as you don't mind a solid dose of action RPG challenge with your anime charm, and some occasionally irritating exploration mixed in with your hack-and-slash, it's ten hours you won't regret.
Read full review

8.50
Dale North—Jun 18, 2012
You'll get about 10 hours of entertaining gameplay, really strong narrative (for a Ys game), and a great localization to go with it. Beyond all of this, you'll also get an unlockable third character and new Steam achievements. Outside of hating action RPGs or not having $20, I can't think of another reason to pass on this game.
Read full review

9.00
Zack Reese—Jul 23, 2012
Considering the story is meant to set in motion the historic events of the Ys universe, it is easy to recommend this game to both newcomers and diehard fans alike. With three character stories, five different difficulty levels, a boss rush mode and an Arena mode, there is near-limitless amounts of content to be had here. With its well-paced and incredible plot, fun combat, great music, interesting characters, solid translation, Steam achievements, and especially its low entry price, Ys Origin holds a lot of value and should be an easy purchase for any RPG fan. Now let's hope XSEED does to Ys I & II what it did to this game.
Read full review
See all critic reviews