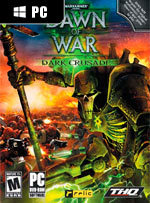 The second expansion to Dawn of War includes all-new, explosive Dawn of War single-player action play, new multiplayer content, and two new playable races including the technologically devastating Tau. In addition to the two new playable races, Dark Crusade will feature an all-new single player campaign centering on the conquest of a "meta-map," with each territory captured giving tangible rewards to the occupying force. Also featured is a greatly expanded multiplayer component and a completely unique economy model for the Necrons.

8.80
Greg Kasavin—Oct 10, 2006
Dawn of War was a fantastic real-time strategy game to begin with, but it takes an expansion pack like Dark Crusade to make the original game feel as fresh and interesting as ever two years later. It helps that the game's presentation has held up so well, between the spectacular graphics and all the thunderous weapon effects and lively unit voices, but it's all been built on a foundation of great underlying tactical gameplay.
open_in_newRead full review

9.00
Joshua LaTendresse—Nov 29, 2006
A bully perhaps, but an incredibly generous one - Dark Crusade is standalone, and doesn't require the original Dawn of War to play. You may lead any one of the seven races in the thrilling single player campaign, and add the Tau and Necron to your lineup for multiplayer beat downs. Dark Crusade is an enormous amount of top-drawer content for $29.99, and newcomers may rightly mistake it for a full blown sequel. Highly recommended.
open_in_newRead full review

8.70
Dan Adams—Oct 09, 2006
The basics of the real-time strategy game have remained largely unchanged. This certainly isn't a bad thing as the Dawn of War experience has always been a super-charged and exciting real-time strategy experience. Two new factions and new units for existing factions add even more variety to an already stacked package.
open_in_newRead full review
See all critic reviewsarrow_forward