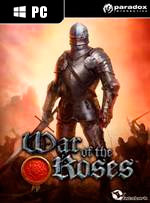 War of the Roses

War of the Roses takes players back to the battle-ravaged medieval era of 15th century England. The game pulls you into a team-based multiplayer melee combat experience, putting their band of knights right in the thick of chaotic battles against opposing hordes armed with swords, battleaxes, longbows and other iconic medieval classics. Portraying the fighting from an up-close-and-personal third-person perspective, War of the Roses features both online multiplayer and a deep single-player campaign. Players will get the chance to lead their knight through a progression system, gaining upgrades and unlocking new content on their path from filthy peasant to unstoppable armored killing machine.

Game Faqs open_in_new
31 Ratings
5.96
This game has not been reviewed. Be the first to review it!

7.00
Andy Chalk—Oct 12, 2012
War of the Roses offers an unusual and intense twist on team-based online combat, and what it lacks in features and polish it (mostly) makes up for in flexible, skill-based melee combat and unapologetic, wanton brutality. For all its bumps and blemishes, it's an awful lot of fun.
open_in_newRead full review

7.50
NATHAN MEUNIER—Oct 05, 2012
War of the Roses delivers a grisly, realistic take on third-person medieval combat that hits most of the right notes. More than just a refreshing change of pace for the genre, it captures the raw kinetic essence of the period's turbulent warfare in an exciting way. Fatshark's plans to roll out additional modes and updates will eventually beef up the content available for you to chew through, but even right now this is a satisfying multiplayer experience.
open_in_newRead full review

7.30
Leif Johnson—Oct 03, 2012
War of the Roses isn’t quite Mount and Blade or Battlefield, but it manages to walk a fine line between the two models to produce an innovative and enjoyable experience. Its mere two gameplay modes and seven maps feel limited and its learning curve might frighten away the most casual players, but its combat feels properly bloody and rewarding, and there’s enough customization available here to stave off any fears of a winter of discontent.
open_in_newRead full review
See all critic reviewsarrow_forward

ZONE OF THE ENDERS THE 2nd RUNNER : M∀RS