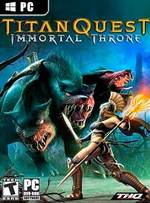 This game requires the base game Titan Quest to play.

Titan Quest: Immortal Throne expands on the original game, transporting the story from the swamps of the Mediterranean to the depths of Hades. This expansion adds 12 hours of single-player content per difficulty level. New gameplay features include an all-new skill mastery that combines with existing masteries to form eight new playable character classes. Immortal Throne also adds dozens of terrifying new monsters, hundreds of unique weapons and an additional 10 levels of character and skill development.

3D Juegos
5 Ratings
9.10
This game has not been reviewed. Be the first to review it!

7.90
Ryan Davis—Mar 15, 2007
You'll have to have played all the way through the original Titan Quest to get the most out of Immortal Throne. Smartly, though, Iron Lore has integrated many of the changes introduced here into the original, which makes Titan Quest itself an easier game to recommend. This is still a pretty straightforward hack-and-slash RPG, but it's also a really good one.
Read full review

7.80
Steve Butts—Mar 16, 2007
Immortal Throne is a great addition to the original Titan Quest. The new inventory options and the new mastery skill add a lot of fun and convenience to the core game and the additional Hades act really extends the game nicely for players who have already completed the rest of the campaign. It won't win over any gamers who aren't already fans of the action RPG format, but it sure works for people who are hankering for a new angle on the same type of action.
Read full review

7.00
Quintin Smith—Mar 13, 2007
Immortal Throne is worth it if you've finished or are close to finishing the original, as the new chapter provides a nice hike in quality, but it's not worth wading through the original game to get to. Now if you'll excuse me, I need to try and fix my mouse. The laser has started flickering strangely...
See all critic reviews