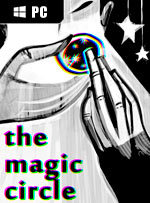 You are the protagonist of an unfinished 1st person fantasy game, trapped in development hell. The designers (played by James Urbaniak, Ashly Burch, and Karen Dyer) are god-like, but so indecisive that they've given you no powers whatsoever. With the help of a mysterious disembodied voice (Stephen Russell) you must seize the tools of game development from these unworthy 'gods', uncovering more of the darkly comic story as you go. Rather than traditional puzzles with a single solution, the incomplete state of each environment is a question that you answer in your own way. Trap the designers' creations, steal their behaviors, and re-mix them to explore and master this world-in-progress.

Jeuxvideo.com
4 Ratings
6.50
This game has not been reviewed. Be the first to review it!

8.50
Nic Rowen—Jul 20, 2015
The message is a little muddled, with so many accusing fingers thrust in so many directions that I'm sure different people will come to radically different conclusions of what it all means. But it's a message worth hearing, and a world worth exploring, if you care about video games and the people that make them.
Read full review

9.50
Alex Santa Maria—Jul 15, 2015
A memorable trip into game design and development hell, The Magic Circle's only sin is that there isn't more of it to play around in. What is here is storytelling and gameplay intermingled with expert care, bringing the player on an intellectual thrill ride that should be seen by all.
Read full review

7.80
Christopher Livingston—Jul 10, 2015
You can expect between 4-6 hours of play, and after completing the story there's a relatively enjoyable minigame that becomes available. You can also continue exploring to find secret areas, audio logs, and anything else you might have missed. Despite its issues, The Magic Circle’s concepts are both clever and put to good use, and editing monsters to solve puzzles is enjoyable throughout.
Read full review
See all critic reviews

Magic: The Gathering – Duels of the Planeswalkers 2014

Heroes of Might and Magic V: Hammers of Fate