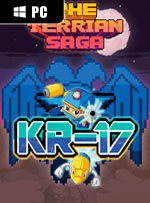 Within the galaxy on the Carina arm live twin solar systems riddled with conflict: the Terrius system and his brother, the Cyrinus system. These two empires travel so closely together they share multiple planets within their gravitational complex. However, the Cyrians have become embroiled in an interplanetary conflict with the Glortac People’s Resistance. Terrius has begun building military installations in order to better help combat the threat of the GPR. One of these bases, built on the planet Valiant, has been sabotaged. A terrorist has released thousands of killer robots on the Valiant base, destroying all personnel.

Game Faqs open_in_new
10 Ratings
7.50
This game has not been reviewed. Be the first to review it!

8.00
Jahanzeb Khan—Jul 16, 2014
Terrian Saga: KR-17 is a loving tribute to glorious days of 32 bit sprite-based video games. The level design is organic and engaging, the gameplay is challenging and satisfying, the controls are ideal, and just the general look and demeanor of the title embodies diehard ’90s video game fandom.
open_in_newRead full review

8.50
John-Paul Jones—Jul 15, 2014
Ultimately though, look beneath the sugary-sweet retro veneer of Terrian Saga KR-17 and you’ll observe the beating, savage heart of a brilliantly old-school platformer that’ll provide hours of nostalgia-tinged entertainment for the same price as a pint. Seemingly the first in a series of games, I look forward to seeing which part of my gaming childhood those maestros over at Wonderfling deftly tap into next.
open_in_newRead full review

The Missing: JJ Macfield and the Island of Memories