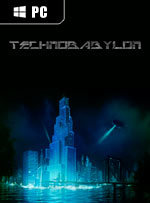 City of Newton, 2087. Genetic engineering is the norm, the addictive Trance has replaced almost any need for human interaction, and an omnipresent AI named Central powers the city.

CEL agents Charlie Regis and Max Lao are investigating a serial Mindjacker who is tapping into the neural wiring of seemingly ordinary citizens, stealing their knowledge and leaving them dead. An agoraphobic net addict named Latha Sesame might be the next target. But when Charlie

7.50
Don Parsons—May 21, 2015
Technobablyon is a very nice adventure game with only a few flaws – the graphics sometimes don’t quite work, the puzzles on a few occasions get away from logic, and the story has only a few points that make you frown on minor bits. However, it bears the trappings of its genre in many ways and that makes it a difficult game to score because if you aren’t interested in adventure games, if you don’t have patience, and you don’t want to experience a well-written narrative where you solve puzzles on the go, it isn’t something that will interest you.
Read full review

8.00
Jahanzeb Khan—May 21, 2015
While there is no shortage of choice when it comes to adventure games — especially on Steam — Technobabylon is not just another face in the crowd. Whether you’re a fan of exceptional adventure games, science fiction, or even its apparent influences, there is a memorable adventure in Technobabylon backed by a believable setting and driven by a strong narrative.
Read full review

8.00
Andy Kelly—May 21, 2015
Puzzles are, this being an adventure game, a big part of Technobabylon, and they’re mostly good—with a few exceptions. ...The worst are the ones that fall back on traditional point-and-click puzzle absurdity, combining items in ludicrous ways and so on. But mostly they’re logical, challenging, and satisfying to solve. ...Developer Technocrat has created a cyberpunk world that, while riffing on a dozen other examples of the genre, manages to have a personality of its own, populated by a cast of genuinely likeable characters.
Read full review
See all critic reviews