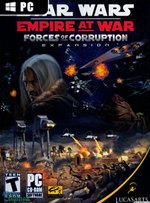 This game requires the base game Star Wars: Empire at War to play.

This expansion pack presents a new, unique point of view of the Galactic Civil War as, for the first time ever, you play as an aspiring Underworld figure. Corruption runs through your veins and drives your desire to become the most notorious criminal leader since Jabba the Hutt. The Rebels have just destroyed the Death Star, and the galaxy is in turmoil. In other words, it’s just the time that you, an ambitious criminal genius named Tyber Zann, have been waiting for. Quench your thirst for power as you build and lead your own forces of scum and villainy. Spread corruption throughout the galaxy using new strategic gameplay elements to influence other factions, steal their funds, slow their production, spy on them and more.

Jeuxvideo.com
56 Ratings
7.50
This game has not been reviewed. Be the first to review it!

8.30
jkdmedia—Nov 01, 2006
Star Wars: Empire at War - Forces of Corruption is a great expansion pack to a great real-time strategy game. Having a third faction that can stand up to the other two factions really helps give this game new life in the single player, and let’s not forget the multiplayer. If you liked the first game and enjoy RTS games in general, you will be playing this game for quite some time during this holiday season.
Read full review

8.50
Steve Butts—Oct 24, 2006
While there was a lot to love about the original Empire at War, there were some design decisions that left many gamers, including us, feeling a little dissatisfied. Petroglyph seems to have taken all of those criticisms to heart and improved on nearly every single aspect of the game. What's more, they've managed to make all the necessary improvements to the original design while still creating loads of entirely new content.
Read full review

7.00
Dan Stapleton—Oct 25, 2006
The biggest issue with the single player campaign was that half way through, we started earning money faster than we could spend it and had massive space stations, capable of repelling nearly any attack, at every world. That said, if there's a Star Wars fan out there who doesn't want more ships, vehicles, and heroes to play with, we haven't met him yet.
Read full review
See all critic reviews

The Settlers: Rise of an Empire