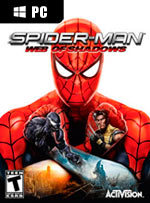 Spider-Man: Web of Shadows immerse players in an all-new action-adventure saga that gives them unprecedented control, never before seen in a Spider-Man game. Armed throughout the battle and confronted by an unrecognizable New York City, players choose to play as a heroic web-slinger or a volatile, destructive anti-hero, fighting with or against a vast number of fan-favorite Marvel heroes and villains, switching instantly between sides, and deciding which missions to undertake to save mankind.

3D Juegos open_in_new
25 Ratings
8.50
This game has not been reviewed. Be the first to review it!

5.30
GREG MILLER—Oct 30, 2008
In the end, Spider-Man: Web of Shadows is a missed opportunity. Activision, Treyarch, Aspyr and Shaba were given a blank slate to create whatever Spider-inspired tale they wanted, and they put together a game starring a whiney hero, a foggy story, repetitive gameplay, and a focus on pretty combat combos instead of engaging combat mechanics.
open_in_newRead full review

6.20
James Pikover—Nov 18, 2008
Boss battles are not memorable and the few cameos other superheroes make are not particularly worthwhile. There is also a lack of unlockable secrets, which in the past had fans playing through the game over and over again to find each and every one of them. In the end, this incarnation of Spiderman is a mediocre game with very little satisfaction upon completion except that the good city of New York will be safe another day.
open_in_newRead full review

Spider: Rite of the Shrouded Moon

TT Isle Of Man: Ride on the Edge