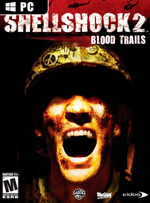 At the height of the Vietnam War, a covert ops cargo plane carrying a top-secret consignment known only as 'Whiteknight' is lost over the deepest, uncharted jungles. Special Ops soldiers are immediately dispatched to the scene to retrieve the top secret shipment and one-by-one they disappear without a trace ... until one month later, one of them suddenly walks out of the jungle. Crazed and deranged, something in the jungle had ripped out his humanity, poisoning his soul. Something in the darkness had driven him mad ... and followed him out.

Amazon
10 Ratings
7.60
This game has not been reviewed. Be the first to review it!

4.60
Erik Brudvig—Mar 02, 2009
Shellshock 2 is a budget title and it shows. The visuals, level design, AI, and just about anything else you can think of can't match up with the top-tier first-person shooters. On top of that, you only get 10 brief stages and no multiplayer options. This attempt at a Vietnam, zombie thriller is about as bad as that concept sounds on paper.
Read full review

5.50
Brett Todd—Feb 27, 2009
Chances are good that you won't hate ShellShock 2: Blood Trails. But odds are also high that you won't particularly enjoy it, either, and will likely forget playing the game in less time than it took to blast your way to its conclusion. Even if you're interested in the Vietnam War and have a zombie fetish, you can likely find a better use for your $30.
Read full review

4.70
Mike Bowden—Mar 05, 2009
It’s such a shame, as the premise and setting are rather interesting. It’s been a long time since we’ve had a first person shooter set in the jungle. In fact I can’t remember one this generation. However, Shellshock 2 will only be remembered for how poor it actually is and what might’ve been. If there’s ever going to be a third incarnation then more time, money and creativity needs to be thrown at the franchise. Poor show all round.
Read full review