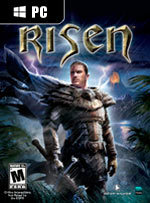 This epic role playing game is set in a medieval world on a volcanic Mediterranean island, The "Risen" story unfolds over four chapters and will offer multiple ways to develop the story by his own actions and decisions. An innovative and intuitive user control interface will support both casual and hardcore gamers. With full world streaming support, the player will have a seamless experience while playing in a fully simulated game world with authentic characters.

3D Juegos open_in_new
30 Ratings
7.90
This game has not been reviewed. Be the first to review it!

8.60
Charles Onyett—Oct 09, 2009
If you're not willing to figure some things out for yourself and the idea of freedom of choice doesn't sit well with you, chances are Risen isn't going to mesh well with your gaming sensibilities. If you're a Gothic fan, however, this is an absolute must-buy. If you're familiar with the genre and are looking to take the next step into a mature, well-realized fantasy world, then this is it. Its combat system isn't the greatest and its pacing is inconsistent, but for those who put in the time to see all Risen has to offer, it's an experience that won't be forgotten.
open_in_newRead full review

8.80
NATHAN MEUNIER—Oct 02, 2009
Risen is not an RPG game for the impatient-minded. It moves along at a slow burn, and bettering your character can be a meticulous and painstaking process at times. The challenge is steep early on, yet the lack of instant gratification and power loot hording is actually refreshing. Faranga is a finely crafted setting for what ultimately turns into a tremendously deep and very satisfying fantasy RPG. It has a few shortcomings; they're largely forgivable, once you get lost in the adventure.
open_in_newRead full review

7.00
Kevin VanOrd—Oct 14, 2009
Risen's flaws are notable. The unsatisfying combat lacks precision and flow, and bizarre quirks are common enough to make you wish the game had spent more time in development. But these problems aside, the game makes you care about its characters, which gives its main quest a sense of urgency few RPGs can match. It takes time to make an impression, but give it a chance: Risen will grow on you, and when it does, you may very well be hooked.
open_in_newRead full review
See all critic reviewsarrow_forward