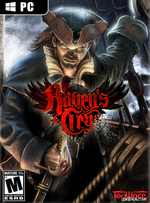 Caught between the rival powers of the Old World, mysterious native tribes, cutthroats, and buccaneers, players assume the role of Christopher Raven, as he explores both land and sea, travels to unexplored corners of the Caribbean, and to the dark corners of the human heart.

Haunted by his inner demons, plagued by dreams of his bloody past, Christopher is a man adrift, having lost his moral compass and any sense of direction. The death of his family has pushed him to the brink of madness, awakening evil forces within him, which Christopher barely keeps in check as he struggles to find his life’s purpose. A routine sea voyage soon leads Christopher down a dark path that will send shockwaves throughout the whole Caribbean world.

Jeuxvideo.com
3 Ratings
0.50
This game has not been reviewed. Be the first to review it!

1.00
Don Saas—Feb 09, 2015
It's not hard to say whether it's worse that Raven's Cry is so broken or that it's full of so much offensive material; the offensive material is worse. But the fact is that either of these things is more than enough for a rational person to avoid playing it. The game is unfinished, a chore when you can play it, and full of disgusting vitriol aimed at women and people of color. Buy a ticket for a different ship.
Read full review

1.00
Jim Sterling—Apr 24, 2015
Raven’s Cry is pointless, intellectually insulting, and mechanically inferior. It’s dated, runs poorly, and looks like garbage. This is all true before we throw in how unfinished it is. ...This is a game that had to be reviewed. It had to be reviewed because it’s disgusting on almost every level, and the fact Topware is selling it for $54.99 is unforgivable. ...I’ve done my part though, my service to humanity. Months after the fact, yes, but I can die knowing I did the right thing. Because fuck Raven’s Cry.
Read full review

4.00
William Schwartz—Feb 01, 2015
Raven’s Cry features the type of bugs, oddities, and imperfections that you would encounter from a game that was in Early Access. However, it’s not in Early Access — Raven’s Cry is a complete and finished game according to its developers. It might have had a chance to be the consummate pirate adventure had Reality Pump executed on their vision, but the game’s decent naval combat systems and ship progression can’t make up for the mediocrity found in the areas that surround them.
Read full review
See all critic reviews

The Raven: Legacy of a Master Thief Chapter 1 - The Eye of the Sphinx

Far Cry 4: Valley of the Yetis