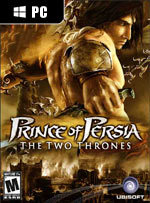 Prince of Persia: The Two Thrones

The third chapter of Ubisoft's continuing revival of the classic Prince of Persia series. The Prince of Persia, a seasoned warrior, returns from the Island of Time to Babylon with his love, Kaileena. Instead of the peace that he longs for, he finds his homeland ravaged by war and the kingdom turned against him. The Prince is rapidly captured and Kaileena has no choice but to sacrifice herself and unleash the Sands of Time in order to save him. Now cast out on the streets and hunted as a fugitive, the Prince soon discovers that past battles have given rise to a deadly Dark Prince, whose spirit gradually possesses him.

3D Juegos open_in_new
24 Ratings
9.00
This game has not been reviewed. Be the first to review it!

9.00
Ivan Sulic—Dec 12, 2005
Two Thrones is great. The story is cool, the heroes are likable, the weak are pitiable, the villains are bastards, the major plot points are exciting, the art is grand, the sound is wonderful...and then the gameplay comes. The established Prince platforming is terrific! The new emphasis on acrobatics as a means to extend combat (and vice versa) is exactly where the series needs to go, too. But there can't be so much light without touches of darkness.
open_in_newRead full review

9.00
Official Xbox Magazine staff—Dec 07, 2005
It's a cracking, clever, and crafty title, packed with surprises and brimming with invention, and a game that makes sure that, once you've completed it, you'll want to go right back to The Sands of Time and play it all over again, if only to spot all those clues that were there all along right from the start. We've said enough - go buy it already!

9.60
StewXX—Dec 06, 2005
The prince is one of the best action heroes in videogames today. He's capable of performing an entire circus routine with just a few button pushes. It can take a player anywhere from 10 to 20 hours to compete the game, and replay value is rather low so you will want to heavily consider whether you want to rent or purchase it. Either way you're in for a great gaming experience.
open_in_newRead full review
See all critic reviewsarrow_forward

Harry Potter and the Half Blood Prince

A Game of Thrones: Genesis