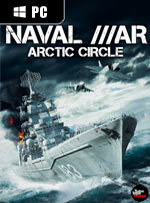 Naval War: Arctic Circle is a maritime realtime strategy game that places players at the controls of some of today's most powerful naval forces, including NATO, the Nordic Alliance, Russia, and the United States. Taking place in the arctic regions of the world, Naval War: Arctic Circle will challenge players as they pass through the world´s deadliest waters vying for dominance and complete control of the arctic seas, allowing commanders to purge enemy forces either above, beneath, or on the ocean surface. Will you be able to reign over the waters?

Game Faqs open_in_new
7 Ratings
8.00
This game has not been reviewed. Be the first to review it!

6.00
Brett Todd—Apr 20, 2012
Adding in a save feature could help immensely in making the game more playable in the short term, and releasing the mission editor promised by the devs could give the game a shot at long-term support from the wargame community. Even though there are some sore points at the moment, the game presents an in-depth tactical challenge for weekend warriors. Just know before pulling the trigger on a purchase that you're dealing with more of an ongoing project than a fully realized game.
open_in_newRead full review

7.60
Tim Stone—Jun 08, 2012
Someone seems to have forgotten to lash down the skirmish generator, scenario editor, and mid-mission save function, too. They all appear to have been washed overboard. Omissions like these, together with some slowdown during busy scraps, and visual tomfoolery in the 3D mode (ships will sometimes teleport to new formation positions, fixedwing planes rise like helicopters) don't prevent Naval War: Arctic Circle delivering tense, fresh, challenging engagements, but they might explain why the launch price is unexpectedly low in the water.
open_in_newRead full review

5.90
Rob Savillo—Apr 30, 2012
Naval War falls flat — and not just because of the drab color palette (if you’ve ever attended a U.S. Navy event aboard a ship, you’d notice that it’s all blues and grays, anyway). As much as I enjoy some of the oddball strategy games available, I can’t bring myself to recommend this to even the most ardent grognards.
open_in_newRead full review
See all critic reviewsarrow_forward