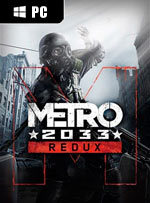 In 2013 the world was devastated by an apocalyptic event, annihilating almost all mankind and turning the Earth's surface into a poisonous wasteland. A handful of survivors took refuge in the depths of the Moscow underground, and human civilization entered a new Dark Age. The year is 2033. An entire generation has been born and raised underground, and their besieged Metro Station-Cities struggle for survival, with each other, and the mutant horrors that await outside. You are Artyom, born in the last days before the fire, but raised underground. Having never ventured beyond the city limits, one fateful event sparks a desperate mission to the heart of the Metro system, to warn the remnants of mankind of a terrible impending threat.

Metro 2033 takes place in underground train tunnels after the surface became I habitable to live.

The story is well crafted albeit little short. The creatures are genuinely scary. The atmosphere in this game is excellent, you are always cautious and scared to explore something new. This intense thrill lasts till the end. The gun play is good, you are always worried about your ammo which adds to the tension. A couple of really good side characters. There is not a lot of combat but the few are intense.

I enjoyed every bit of the game, it felt different to me and I'm not a fan of FPS.

8.50
Robert N. Adams—Feb 21, 2015
Metro 2033 Redux is an overall solid FPS game with an interesting story and amazing dark atmosphere. It has a handful of minor flaws, but they’re not significant enough to detract from the overall experience of working your way through the creepy and unforgiving tunnels of the post-apocalyptic Moscow Metro.
open_in_newRead full review

9.00
PC Gamer—Aug 21, 2014
For a game with a grim colour filter, 2010’s 2033 was also remarkably pretty. 2014’s version is a marked difference. I’m not talking a little texture upgrade here, I’m talking new meshes, new animations and reworked environments. Metro 2033 Redux is Metro 2033 tweaked and polished to a high standard; this feels like the definitive version of the game 4A originally wanted to make.
open_in_newRead full review

8.60
Angelo M. D'Argenio—Aug 19, 2014
Metro 2033 Redux is remaking done right. It’s a perfect purchase for either newbies who haven’t experienced the first game, or vets who want to experience the game again in a brand new light. I wholeheartedly recommend Metro 2033 Redux to anyone who is a fan of shooters, horror games, stealth games or post-apocalyptic sci-fi.
open_in_newRead full review
See all critic reviewsarrow_forward