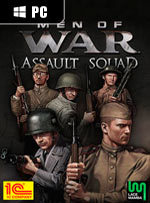 Men of War: Assault Squad takes place across the globe during the height of World War II and features five different armies each with their own unique units, vehicles and abilities. The game also features the unique "direct control" feature which enables players to maneuver units using the directional keys, rather than pointing and clicking. PC Generals can get behind the controls of a tank to smash through obstacles, crush soldiers under its tracks and fire armor-piercing shells at enemy emplacements, or take control of individual soldiers as they fight.

Gamestop
2 Ratings
9.50
This game has not been reviewed. Be the first to review it!

8.10
Tim Stone—Apr 01, 2011
In a genre where communal play is often technical and cut-throat, Assault Squad stands out like a skylined Sherman. Though the three competitive MP modes are played by some wily veterans, defeats are almost always flecked with fun, and opponents and team-mates rarely triumph-at-all-costs tosspots.
Read full review

7.00
Matt Hughes—Mar 07, 2011
There’s no doubt that the gameplay of Men of War is brilliant, but seeing as Assault Squad is only a multiplayer expansion and features a steep learning curve, it’s hard to justify the $35 asking price. Fortunately, those seeking a more campaign-based experience won’t have to wait long - a Vietnam-themed title is due to be released shortly.
Read full review

8.00
Brett Todd—Apr 29, 2011
When you get right down to it, Men of War: Assault Squad is a tactical WWII RTS game for those who have mastered the somewhat easier-to-handle Company of Heroes. This is a challenging battlefield experience somewhat closer to a wargame than to a traditional RTS game and as such is geared to more of a hardcore crowd. It isn't such a great option for tank rushers who don't have a lot of time to spare to learn combined-arms intricacies. Be aware of these demands going in, and you will have a great time refighting this war.
Read full review
See all critic reviews

Of Orcs and Men