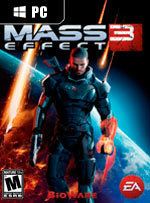 In Mass Effect 3, an ancient alien race known only as Reapers, has launched an all-out invasion of the galaxy, leaving nothing but a trail of destruction in their wake. Earth has been taken, the galaxy is on the verge of total annihilation, and you are the only one who can stop them. The price of failure is extinction. You, as Commander Shepard, must lead the counter assault to take it back. Only you can determine how events will play out, which planets you will save from annihilation and which alliances you will form or abandon as you rally the forces of the galaxy to eliminate the Reaper threat once and for all.

9.00
Kevin VanOrd—Mar 06, 2012
Mass Effect 3 has its flaws, but they're of minimal consequence in a game this enthralling. By filling the Milky Way with vibrant, singular characters, the series has given you a reason to care about its fate. Ostensibly, Mass Effect 3 is about saving the galaxy, but a galaxy is just a thing--an idea, an abstract, a meaningless collection of plutinos, planets, and pulsars. But the game is actually about saving people.
Read full review

9.20
Matt Walker—Mar 06, 2012
When I sat down to play through Mass Effect 3, I honestly had no idea what to expect. Was this going to become the final chapter in one of the most epic storylines in gaming, or was it just going to cop out with an ending to rival that of Battlestar Galactica or The Sopranos? Either way, it didn't matter. Like everyone else, I was hooked from the beginning. The extras and refinement brought into this game have only made it better, and BioWare has made the latest installment in the Mass Effect series nearly perfect.
Read full review
See all critic reviews