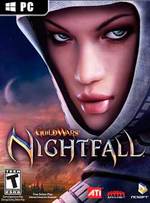 This game requires the base game Guild Wars to play.

In this third Guild Wars campaign, players must fight to hold back the night as a mad ruler attempts to free an outcast god and bring darkness to the continent of Elona. But players won’t fight alone. Guild Wars Nightfall introduces new customizable Heroes who level up, follow player instructions in combat, and use skills and equipment of the player’s choosing. These Heroes will follow the player through savage coasts, ancient monuments, and poisonous deserts during an epic story that spans twenty missions and hundreds of quests.

3D Juegos
5 Ratings
9.30
This game has not been reviewed. Be the first to review it!

8.20
Greg Kasavin—Nov 09, 2006
Nightfall still offers unique and very deep gameplay that combines shades of massively multiplayer gaming, action RPGs, collectible card games, and competitive action games all in one. It's a formula that millions of players around the world are still actively engaged in with good reason.
Read full review

9.00
Tyler Nagata—Nov 22, 2006
Guild Wars fans should not hesitate in picking up this title for the new professions and heroes alone. And with no monthly fees, Guild Wars Nightfall serves as an excellent introduction to those unfamiliar with the MMORPG genre or Guild Wars series.
Read full review

8.40
Charles Onyett—Nov 09, 2006
If you've never experienced Guild Wars, Nightfall is the place to start. It offers plenty of augmented features to make playing solo more viable, while simultaneously facilitating cooperative play. Grouping with a few players then dropping in Heroes to fill the open slots is far more time efficient than waiting to fill up an entire group with human players.
Read full review
See all critic reviews

War of the Vikings