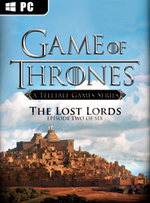 Feb 3, 2015
NA
playscore
To get a playcore, a minimum of 50 gamer ratings and 3 critic reviews are required.
NA
gamerscore
person
41
7.67
criticscore
rate_review
21
This is an episodic game. You will need to get the base game and all succeeding episodes to experience it as designed.

House Forrester is in disarray. Their liege lord and his heir are dead, Ironrath is occupied by Whitehill soldiers, and the youngest member of the family has been taken from them. The survival of the family now depends on a handmaiden, a squire forced to take the black, and an exiled son.

At King’s Landing, Mira Forrester must weigh her loyalty to Margaery Tyrell against the needs of her family, all the while choosing how to play the political games of Tyrion Lannister. To the far north, Gared Tuttle finds that the wall and its crows hold little love for a squire from the Wolfswood, but finds kinship in the bastard son of Ned Stark. To the east, in far-away Yunkai, Asher Forrester, the exiled son, is called back to Westeros to aid his family, but how can one man help when the Boltons rule the north with an iron fist?A misstep by any one of them could spell doom for the entire family.Meanwhile, an unexpected source of hope returns to the Forresters, but Ironrath is no place for the weak.

A Game of Thrones: Genesis

Jeuxvideo.com open_in_new
17 Ratings
8.50
This game has not been reviewed. Be the first to review it!

9.00
Andrew Otton—Feb 04, 2015
Game of Thrones Episode 2 is great in its own right and should leave all of us excited for what is to come. Fans of the TV series and of the books should be more than happy with this helping of A Song of Ice and Fire as they wait for their respective series to continue.
open_in_newRead full review

7.00
Dan Stapleton—Feb 02, 2015
While the story of these likable new characters continues after the shocking events of the premiere, the second episode makes it feel like a false start by neglecting to advance the plot in interesting ways. To live up to its name, this Game of Thrones series is going to need more than unexpected deaths - it needs those deaths to be in service of keeping tantalizing secrets.
open_in_newRead full review

7.60
Angelo M. D'Argenio—Feb 02, 2015
Personally, I think that Telltale's designers are spreading themselves too thin by including four main characters, each in a different setting, each with a different goal. Since they devote the same amount of time to each character, it ends up feeling as if very little is accomplished by any of them. ...For now, I care about this story enough to keep playing, and I would recommend Episode Two to anyone who played Episode One. However, this is definitely one of Telltale’s weaker episodes overall.
open_in_newRead full review
See all critic reviewsarrow_forward

Ghost of a Tale

My Memory of Us

The World Next Door

Irony Curtain: From Matryoshka with Love