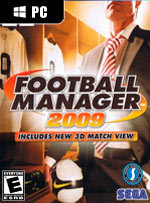 Football Manager 2009's match engine has seen more testing than ever before having been extensively beta tested in Football Manager Live for the past year. The famous Football Manager match engine can now be viewed in full 3D with motion captured animations for the players. Sports Interactive has been working on the 3D match engine for nearly 3 years with the support of SEGA Japan's Virtua Striker team who provided the motion capture data and some of the animations. You can now watch your matches in 3D from multiple camera angles and re-watch any part of the match by fast forwarding and rewinding the action using a new match time bar that flags the key moments in the game.

3D Juegos open_in_new
4 Ratings
7.70
This game has not been reviewed. Be the first to review it!

9.00
Steve Hill—Nov 19, 2008
Even without the 3D engine, Football Manager 2009 is still fully deserving of its classic rating, providing a staggeringly comprehensive simulation of the complex world of management. We predict a few patches before the match engine is fully functioning, but even in its current state, it tangibly enhances the experience.
open_in_newRead full review

9.00
James Orry—Nov 09, 2008
However, no problem proved bad enough to significantly tarnish my experience and on the whole Sports Interactive has tweaked an already brilliant game to make something even better. If you want a high stress virtual job on top of your real one, have hours to burn each day looking at an interactive database, and fancy yourself as the next Alex Ferguson, Football Manager 2009 might be the only game you'll need until this time next year.
open_in_newRead full review