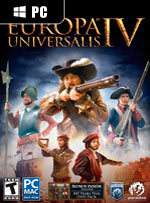 The game is mainly set in the historical era of the initial European exploration and colonization of the New World. The game map covers the entire Earth (minus the polar regions), and players are free to explore and expand into most of it except for certain lands such as deserts and tundra that are considered uninhabitable or unexplored historically during the in-game years. Players can choose to play single-player mode versus the AI, or multiplayer over a LAN or the Internet against a mix of human and AI opponents. The player may also switch to controlling a different country within the same game world.

Gamestop
1 Rating
10.0
This game has not been reviewed. Be the first to review it!

9.00
Daniel Shannon—Aug 20, 2013
Europa Universalis IV is every bit as epic as its predecessors, and the changes that it has made are overwhelmingly positive. For instance, the diplomatic, administrative, and military power aspect is more fun than the older system of bureaucrats and sliders restricting your actions. Also, the automation of mechanics like rebel repression and colonization wipes away the most tedious aspects of the series.
open_in_newRead full review

7.00
Dan Starkey—Aug 29, 2013
Europa Universalis 4 too often struggles to foster the level of appreciation it deserves, but the potential for historical "what-ifs" will keep any interested players busy for a very long time. It may be a bit rough around the edges, lacking the kind of spit-shine we've come to expect from better-funded fare like Civilization V, but the core experience is one that encourages a sandbox approach to history.

8.00
Greg Tito—Aug 14, 2013
Europa Universalis IV is a well-constructed simulation of what it's like to bring through the colonial era. For history buffs and strategy grognards, EU4 delivers an excellent update to a storied franchise, but it may be hard for new players to penetrate its esoteric systems. If you loved EU3 or Crusader Kings 2, you'll likely enjoy EU4 even if you argue on forums about rules changes. If you are a strategy newbie or used to winning all the time, I'd recommend a more straightforward game.
open_in_newRead full review
See all critic reviewsarrow_forward