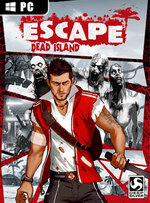 Escape Dead Island is a Survival-Mystery game set on the enigmatic island of Narapela after the events of the zombie outbreak of the original Dead Island. The story lets players unravel the origins of the zombie virus through the eyes of the would-be documentary journalist Cliff Calo. There are no superpowers to keep Cliff alive, just a few makeshift weapons against hordes of infected zombies. It will be integral to choosing wisely between stealth and combat at certain moments in the game.

3D Juegos
3 Ratings
6.50
This game has not been reviewed. Be the first to review it!

3.00
Joshua Garibay—Nov 20, 2014
Escape Dead Island never manages to create anything impressive, with very little in terms of redeeming qualities. It tries to stand out from the other installments in several ways by taking on a new direction, but it ends up providing a frustrating and bland experience that is easy to recommend skipping.
Read full review

5.00
Jim Sterling—Nov 17, 2014
I’ve played far worse games than this. I encountered no egregious, game-breaking glitches, and for as exanimate as the combat and stealth mechanics are, at least they’re functional, as inoffensive as they are unimpressive. But it’s just so completely, exhaustingly boring. There’s nothing to it. It plods along, doing very little to ever annoy its audience, but doing precisely diddly-squat to ever entertain it, either.
Read full review

4.00
Angelo M. D'Argenio—Nov 19, 2014
It’s certainly not the worst game I have ever played, but it’s bland and generic and feels rushed and unfocused. It’s obvious that Deep Silver’s efforts are all going into Dead Island 2 right now, and that this game got only a portion of the attention. You might want to keep up with all the Dead Island games, and if so pick this one up I guess, but outside of being yet another title with the words “Dead Island” in the title, I can’t honestly recommend it.
Read full review
See all critic reviews

The Walking Dead: A New Frontier