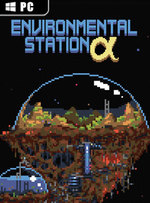 Apr 22, 2015
NA
playscore
To get a playcore, a minimum of 50 gamer ratings and 3 critic reviews are required.
8.63
gamerscore
person
704
NA
criticscore
rate_review
1

Environmental Station Alpha is an action adventure platformer with a retro aesthetic and heavy emphasis on exploration. In the game the player controls a robot sent to investigate a mysterious, abandoned space station with the mission to find out what exactly took place there. Overrun by wildlife the station is immensely dangerous to explore, and on top of that earthquakes have made navigating the various areas very challenging. Over the course of the game the player must uncover secrets, fight loads of bosses and amass powerups in order to really figure out the fate of the space station. The game also features a wonderful ambient soundtrack to immerse the player into the gameplay.

Game Faqs open_in_new
19 Ratings
8.22
This game has not been reviewed. Be the first to review it!

7.00
Jed Whitaker—Apr 28, 2015
Overall, Environmental Station Alpha didn't reinvent the wheel when it comes to Metroidvania games, but it certainly helped satisfy my appetite. The amount of secrets and post-game crypticness might be great for some, and it does extend the playtime quite a bit, but as a completionist I found it to be more legwork than I'd like. Call me crazy, but I don't like tons of cryptography in my games.
open_in_newRead full review

Hot Tin Roof: The Cat That Wore A Fedora

BOMB: Who let the dogfight?