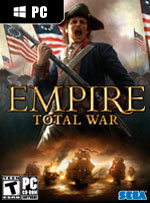 Command the seas, control the land, forge a new nation, and conquer the globe. Empire: Total War takes the Total War series to the eighteenth century Age of Enlightenment — a time of political upheaval, military advancements, and radical thought, captured in stunning detail and at your complete control. Empire: Total War introduces a host of revolutionary new features, including true 3D naval combat. For the first time in the Total War series, intuitively command single ships or vast fleets upon seascapes rich with extraordinary water and weather effects that play a huge role in your eventual glorious success or ignominious defeat.

9.00
Iain McCafferty—Mar 12, 2009
Empire is without doubt or reservation the best Total War yet and is a game of unmatched scope and ambition, with its uniquely compulsive blend of turn-based strategy and real-time tactics. It would have been easy for Creative Assembly to stick to the already successful template used in the Total War series so far, but in taking the risk in adding an extra dimension to the game and tackling a more modern era, Empire sets the new standard for strategic wargaming on the PC.
Read full review

9.50
Matt Bertz—Sep 22, 2009
Empire also introduces naval battles for the first time. Watching your deckhands prep their ships for battle is awesome, but as the frigates and sloops move in for the kill they often engage in an awkward tango of shifting sails over which players have minimal control. Since every real-time battle is an opt-in affair, not even these battle deficiencies can take away from the fantastic Empire experience. This is one of the most sophisticated, entertaining, and historically accurate strategy games ever made.

8.50
Kevin VanOrd—Mar 09, 2009
It's impossible to condense an experience as broad and as rich as Empire: Total War to a few thousand words. Its complex amalgam of turn-based empire building and real-time skirmishing is exciting and involving, and it's both fuller and more streamlined than its predecessors. But like those predecessors, it inspires that compulsion to accomplish just one last turn, even when your eyes are bleary and your body longs for sleep.
Read full review
See all critic reviews

Magic: The Gathering - Duels of the Planeswalkers 2015

Crusader Kings II: The Reaper's Due