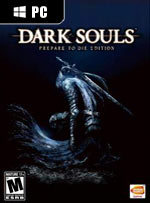 Enhanced with additional content for its PC debut, the Prepare to Die Edition of Dark Souls includes an enhanced PVP mode allowing players to more closely assemble battles against one another online in an all-out fight to the death that fans have demanded! In addition, the development team at FromSoftware has revealed an untold chapter in the world of Lordran created specifically to help further expand upon the lore of the game. 'Artorias of the Abyss' will include all-new areas to explore, enemies to encounter, and bosses to take down one by one as players are treated to an unseen side of Lordan where players must stop the spread of darkness at all costs by facing and defeating the Dark Knight Artorias.

8.90
Rich McCormick—Aug 24, 2012
If you know the trip downstairs will be long, hard, and sometimes uncomfortable, but you want to take it anyway because you know it will reward you like nothing else – if that noise downstairs leaves you too curious to climb back into bed and cover your ears – then Dark Souls: Prepare to Die Edition is waiting for you at the bottom of the stairs. I suggest you go and investigate. A deep, dark, challenging and impossibly rewarding fantasy RPG, sadly given a straight and perfunctory port from console.
open_in_newRead full review

9.50
Carolyn Petit—Sep 10, 2012
The genius of Dark Souls isn't just in its environments, or its monsters, its thrilling combat, or the unusual and exciting ways in which players are connected. It's in the uncompromising way it throws conventional wisdom to the wind, dropping you into its dangerous world without guidance, making you fend for yourself, and teaching you to shrug off defeat time and time again to finally earn victory.
open_in_newRead full review

9.00
Adam Beck—Sep 01, 2012
Even with some graphical hiccups, it remains superior to the console counterparts, offering more content, better graphical options and a frame rate that is steady throughout. Dark Souls: Prepare to Die Edition is an experience like no other that will invoke a multitude of emotions while keeping you planted on the edge of your seat.
open_in_newRead full review
See all critic reviewsarrow_forward