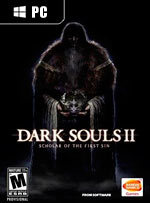 The undead curse continues to spread across the kingdom of Drangleic with Dark Souls II: Scholar of the First Sin, a compilation of the critically acclaimed Dark Souls II along with its three DLC chapters (Crown Of The Sunken King, Crown Of The Old Iron King, and Crown Of The Ivory King) along with an array of all-new content.

Face the challenge once again in this sequel to the hardcore action RPG. Dark Souls II features a new hero, a new storyline, and an unfamiliar world for players to survive in while delivering its signature brand of unrelenting punishment that players hunger for. Epic battles with gruesome enemies and blood-thirsty bosses await adventurers as they traverse through a devastated world filled with death and despair; only those who are strong willed or cunning can survive this journey to achieve great glory.

Jeuxvideo.com open_in_new
59 Ratings
7.25
This game has not been reviewed. Be the first to review it!

8.00
Anthony LaBella—Apr 06, 2015
Dark Souls II: Scholar of the First Sin targets two audiences: newcomers and veterans. In both cases it succeeds. Folks who have yet to play Dark Souls II will get the best version of the game with all of the available content, while veterans who love Dark Souls II will get to experience a series of small alterations that do enough to set Scholar of the First Sin apart from the original
open_in_newRead full review

9.00
Matthew Sakuraoka-Gilman—Apr 02, 2015
It's the best version of one of last year's best games and runs beautifully on new-gen. Worth buying, especially if you've never played DS2 before.
open_in_newRead full review

8.50
Mike Splechta—Apr 02, 2015
Being invaded by another player can be fun, and is certainly more engaging than being invaded by an NPC. ...Sure, it might be the most complete version of the game, but the fact that the durability bug remained even after so long is baffling. While I don't personally love all of the changes made, I do feel that FROM made this version for me, and players like me. New players might feel alienated a bit with the crazy enemy placements, but in the end, it's just a matter of "Git gud" right?
open_in_newRead full review
See all critic reviewsarrow_forward