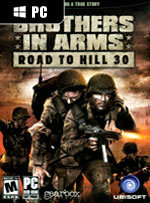 Brothers in Arms: Road to Hill 30

Created by Texas-based Gearbox Software, Brothers in Arms aims to be one of the most realistic and authentic World War II shooters ever. Based on a true story, the game puts players in the role of Sgt. Matt Baker, a D-Day paratrooper squad leader as he leads the squad through the European campaign. Each battlefield has been meticulously recreated from aerial reconnaissance images, US Army Signal Corps photos and eye-witness accounts of war-torn Normandy.

Brothers in Arms: Earned in Blood

Gamestop
1 Rating
10.0
This game has not been reviewed. Be the first to review it!

8.70
PC Zone Staff—Mar 30, 2005
Needless to say, the multiplayer is just a small part of the total Brothers In Arms package, and it's a package we think is highly deserving of praise. Gearbox's tactical shooter is not just great fun, it's a technically excellent and innovative piece of work that takes some bold design risks and slam-dunks pretty much every one.

9.00
Bob Colayco—Mar 18, 2005
Brothers in Arms offers a unique gameplay experience in the unlikeliest of genres: a World War II shooter. The campaign is varied and lengthy enough to keep players thrilled from beginning to end. There's even good incentive to play through again at higher difficulties. Combined with a well-designed and thought-out multiplayer aspect, Brothers in Arms offers one of the best World War II gaming experiences to date.
open_in_newRead full review

9.10
Steve Butts—Mar 15, 2005
Brothers in Arms takes some of the best features of each and adds an entirely new tactical dimension. Offering up engaging, squad-based battles and presenting it all in an authentic yet undeniably cinematic setting, Brothers in Arms is a game that, to borrow a phrase from General Patton, "grabs you by the nose and kicks you in the ass."
open_in_newRead full review
See all critic reviewsarrow_forward