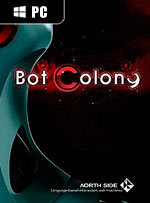 Jun 16, 2014
NA
playscore
To get a playcore, a minimum of 50 gamer ratings and 3 critic reviews are required.
6.87
gamerscore
person
52
NA
criticscore
rate_review
0
warning

Bot Colony is based on a thriller novel involving a large Japanese robot manufacturer, Nakagawa Corp. It’s 2021, and a spy from KHT, Nakagawa's arch-competitor, has infiltrated the high-tech giant’s seemingly impregnable south Pacific sanctuary. The spy has re-programmed the island’s robots and is destabilizing Bot Colony, but this is only the precursor to a larger, more terrifying scheme.You have 3 days to catch him, and you'll need to rely on machines to get the job done.

Game Faqs open_in_new
6 Ratings
8.66
This game has not been reviewed. Be the first to review it!

Out Of The Box

The Awesome Adventures of Captain Spirit