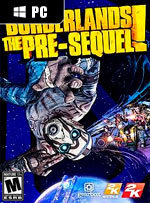 Launch into the Borderlands universe and shoot ‘n’ loot your way through a brand new adventure that rockets you onto Pandora’s moon in Borderlands: The Pre-Sequel! Borderlands: The Pre-Sequel is a new role-playing shooter in the critically acclaimed Borderlands series. Play as four all-new character classes while carving a path of destructive mayhem across Pandora’s never-before-seen low-gravity moonscapes with all new moves, weapons, and vehicles! Get high with low gravity and jump right in to fight alongside future megalomaniacal tyrant Handsome Jack, while preventing the destruction of Pandora and its moon.

Borderlands: Game of the Year Edition

8.00
Blair Inglis—Oct 27, 2014
To say that Borderlands: The Pre-Sequel is nothing more than Borderlands 2 on the moon would be a disservice to the hard work that the developers have put in, and the new features that are definitely noticable. It’s not better than that game, but it’s pretty much essential for anyone seeking out more Borderlands, or someone eager to learn more about the lore of the universe. The Pre-Sequel is a superb action RPG which anyone can jump into, with tons of guns and plenty of fun to be found.
open_in_newRead full review

8.00
Paul Sullivan—Oct 13, 2014
While it doesn’t reinvent the wheel, Borderlands: The Pre-Sequel is tweaked sufficiently to warrant being its own entity. The oxygen, new classes, and gravity mechanics make gameplay feel fresh, while the story provides enough of a thread to tie things together. Sure, the missions and environments are repetitive and there are some technical hiccups, but The Pre-Sequel is fun to play, and well worth a look for fans of loot and/or shooting.
open_in_newRead full review

9.00
Ron Whitaker—Oct 13, 2014
Borderlands: The Pre-Sequel is exactly what fans of the series wanted in a new installment — more Borderlands. It keeps everything that made Borderlands 2 great, and adds a few new tricks of its own. It might not be innovative, but it’s damn fun to play. Honestly, isn’t that what really matters?
See all critic reviewsarrow_forward