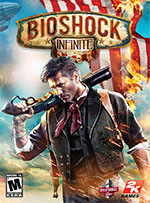 Set in 1912, the game has protagonist, former Pinkerton agent Booker DeWitt, sent to the floating air city of Columbia to find a young woman, Elizabeth, who has been held captive there for most of her life. Though Booker rescues Elizabeth, the two become involved with the city's warring factions: the nativist and elite Founders that rule Columbia and strive to keep its privileges for White Americans, and the Vox Populi, underground rebels representing the underclass of the city. During this conflict, Booker learns that Elizabeth possesses strange powers to manipulate "Tears" in the space-time continuum that ravage Columbia, and soon discovers her to be central to the city's dark secrets.

7.40
Mar 2, 2021
A pretty standard first person shooter game with the added element of supernatural powers. The story is amazing as well as the artwork. The weaponry used is a mix of futuristic and vintage. Aerial battles on ziplines are also a feature on this game so always keep a sharp eye out for enemies in all directions.
2
0 Comment

10.00
Nov 19, 2020
Everything was amazing in this game when it was first released. Really good gameplay!
0
0 Comment
See all gamer reviews

10.0
Arthur Gies—Mar 25, 2013
BioShock Infinite's big thoughts and complicated narrative don't obscure the brilliant action game that carries those messages through. It's hard to know if Infinite will prove to be another major point of artistic discussion and development of the medium the way that BioShock was. But in every way, BioShock Infinite lives up to the promise of its legacy, and it looks poised to establish a new one.
Read full review

10.0
Jim Sterling—Mar 25, 2013
As a game, BioShock Infinite has its successes and its falterings consistent with any suitably complex piece of interactive entertainment. As a story, as an exercise in drawing the player into a believable and relevant world, as proof of exactly what a videogame can mean to a person. Well, I already said it. BioShock Infinite is damn near perfect.
Read full review
See all critic reviews