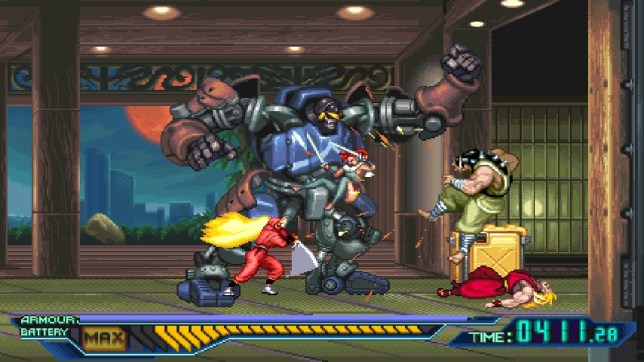 The Beat 'Em Ups are invading the new platforms and Taito is making their own entrance with The Ninja Saviors - Return of the Warriors. Already released on European platforms, The Ninja Saviors has just recently received its North and South American release date of October 15th for the Nintendo Switch as well as the PlayStation 4.

Day 1 Physical Edition buyers will be getting a printed manual, stickers, as well as a poster along with their copy. As a special compensation for the delayed launch, Taito is even putting in two character cards of Raiden and Yaksha, both of which will be exclusive to North America.

Here's a summary of the game:

In THE NINJA SAVIORS – Return of the Warriors, players assume the role of one of five android ninjas to take on the tyrant Banglar, and his henchmen, with a variety of individual moves in a dystopian future. Along with two completely new characters, the fully revised side-scrolling arcade brawler also finally offers fans the eagerly awaited two-player co-op mode and an online ranking system so that you can measure yourself against fighters from all over the world. In a total of eight levels, players will brawl their way through waves of enemy hordes, either alone or in pairs.

Looking for titles releasing soon, you can check out our respective lists for the Nintendo Switch and the PlayStation 4.