Gigantamaxing is the next BIG evolution 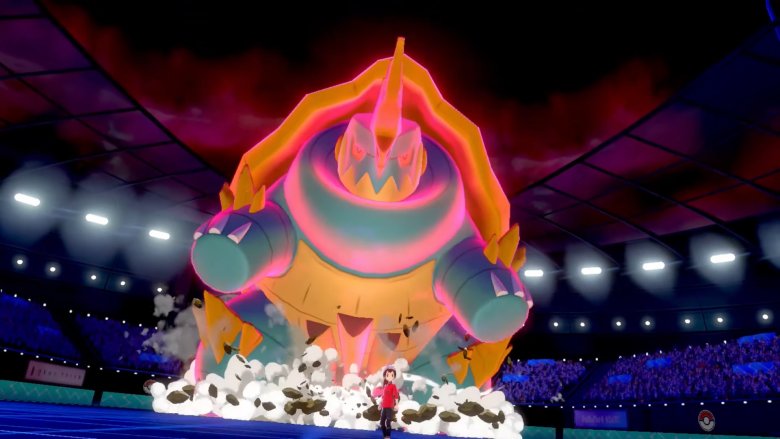 There has been plenty of doubts recently but Nintendo is still fighting to bring their first full Pokemon game to the Top Switch Games lists.

In their latest announcement, Nintendo introduces us to the game-changing phenomenon that is Gigantamaxing.

While we recently learned about Dynamixing, a special feature in Galar Pokemon that seems to change the size of the Pokemon for more epic battles. With Gigantamaxing, Pokemon don't change sizes, they also change the appearance and allow for the use of special G-Max Moves.

The two Pokemon revealed to have these capabilities are Drednaw and Corviknight.

Gigantamax Drednaw
Type: Water/Rock Height: 78′9″ Weight: Unknown Ability: Strong Jaw / Shell Armor The power of Gigantamaxing has allowed Drednaw to stand on its hind legs and become bipedal. From its standing position, it can come crashing down on opposing Pokémon and crush them with its massive body. Drednaw normally keeps its neck retracted within its shell, but when it attacks, it can rapidly shoot its neck out. Its jaws are also incredibly strong and can easily bite through huge metal towers. The strength of its jaws combined with the force of its neck gives Drednaw the power to punch a hole through a rocky mountain in a single strike. Water-type moves used by Gigantamax Drednaw will change to G-Max Stonesurge. G-Max Stonesurge doesn’t just deal damage to an opponent—it will scatter sharp rocks around the opponent and cause Pokémon entering the battlefield to take damage.
Gigantamax Corviknight
Type: Flying/Steel Height: 45′11″ Weight: Unknown Ability: Pressure/Unnerve Corviknight uses its massive wings to catch updrafts created by Gigantamax energy to hover in the air while it battles. The armor on its body has been reinforced, so attacks from Pokémon on the ground barely have any effect. Gigantamax energy has caused the armor covering Corviknight’s wings to separate and become blade birds, capable of flying independently. Flying-type moves used by Gigantamax Corviknight will change to G-Max Wind Rage, which removes any effects of moves like Reflect, Light Screen, Spikes, and Electric Terrain that the opponents may have.

The new video also highlights a few adorable new pokemon like Alcremie, a cream type pokemon that distracts with its sweet cream scent; Rolycoly, a coal pokemon that gets a speedboost form Fire and Water type moves; and Duralodon, a steel/dragon type pokemon with both light and heavy metal abilities.

It also showed Gym leaders like the strongest, Leon; the fighting type expert Bea; and the ghost-type Gym leader Allister. These, alongside characters Chairman Rose, the businessman and chairman of the Pokemon League; as well as his secretary Oleana who, in turn, acts as the Rose's company vice president.

Pokemon Sword and Shield is set release on the Switch on November 15, 2019