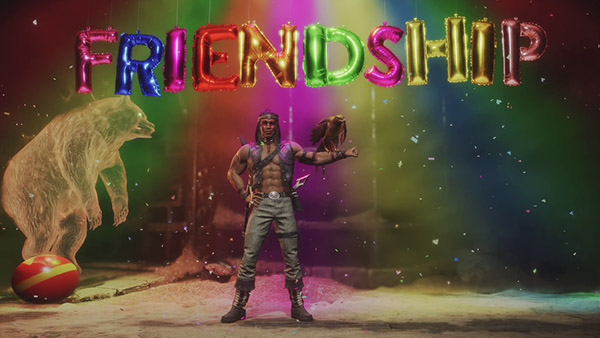 While the Aftermath expansion comes with new characters and a new campaign, there’s actually going to be a free treat for gamers who already own Mortal Kombat 11. Friendships will be making their comeback in the game, and NetherRealm Studios has released an official trailer for them.

Friendships will be available for all the core characters and even the DLC ones like Sindel and Nightwolf. We don’t get a peek at Friendships for incoming characters Fujin, Sheeva, and Robocop, but they may also get their own when the expansion comes out.

Friendships won’t be the only free thing coming with the expansion either. Players will get access to the new stage of the game like the Dead Pool the Soul Chamber from Mortal Kombat 3. All players will also get access to stage fatalities, which will be available for stages existing in the game as well.

With the Kombat pack completed and Aftermath coming later this month, a lot of fans are curious when NetherRealm will announce the second Kombat Pack with new characters. We should probably expect a delay because of COVID-19, but hopefully the next batch of incoming characters will finally include Evil Dead’s Ash (Bruce Campbell), who was said to be delayed because of a licensing dispute.

If you already own the game, the Aftermath expansion is going to run for $39.99, but if still don’t own it and want the full package, you can spend $59.99.

Mortal Kombat 11: Aftermath is set to come out this May 26, but the base game is available now for PC, Xbox One, Nintendo Switch, and PS4.