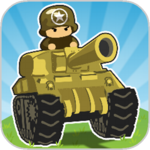 Front Wars is a turn-based strategy game. Take control of allied troops and revive the great battles of the second world war in a tense campaign against the german army. You can challenge your friends online on Facebook, Gamecenter or by the passing the device.

iTunes
19 Ratings
7.17
This game has not been reviewed. Be the first to review it!

5.00
Chris Aylott—Jan 30, 2014
Front Wars doesn’t live up to that expectation. It has a lot of potential, and Advance Wars players may enjoy it in its current state. But it needs more work from its developers before it can declare victory in Europe.

7.00
Nadia Oxford—Jan 24, 2014
Front Wars is not perfect by any means. It’s derivative, its tutorial is lacking, and its translation is sub-par. But if you’re aching for a new Advance Wars experience, or if you’d just like to see its formula applied to a real-life war, you could do worse than hang with this shell-shocked soldier for a while.
Read full review

6.00
Damien McFerran—Jan 28, 2014
Elsewhere, that are other issues. The build that we played was plagued with touchscreen problems - it was difficult to accurately tap on some parts of the display, and nonsensical errors messages were thrown up as a result ("Could not find unit 0"). And yes, we checked with other titles and they worked just fine, which rules out hardware as the problem. The mission briefings are also rather iffy, with some questionable English making them more humourous than they perhaps should be.
Read full review

The Battle of Polytopia