This game has been officially shutdown since May 28, 2018. 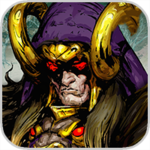 Revisit the dark fantasy world of Arnashia with Blood Brothers 2, and experience a tale of allegiance, betrayal, ambition, and revenge.

A century has passed since the time of Blood Brothers. The tales of Galbraith and his vampire armies are now but a faded legend. The peoples of Arnashia celebrated their peace and freedom under the newly formed power, but not for long. When the new generation proved to be less capable of ruling, war is again on the horizon as discontent parties are no longer willing to lie low. Old alliances were broken, and new ones formed overnight. In this age of chaos, whom do you trust, and whom do you destroy?

Game Faqs open_in_new
1 Rating
6.00
This game has not been reviewed. Be the first to review it!

8.00
Andrew Buffa—Jan 30, 2015
Blood Brothers 2 is a great strategy game. The artwork looks unique and there are a lot of interesting generals to assume the role of. The game is held back by an unforgiving stamina system and its need of a constant Internet connection, but don't let these issues prevent you from experiencing what is an otherwise quality effort.
open_in_newRead full review

6.00
Spanner Spencer—Jan 27, 2015
So well camouflaged, in fact, that the free game is a good way to spend an hour or two until F2P fatigue sets in, and by that stage you’ll know whether or not Blood Brothers 2 is a game you want to drop real money on. And ultimately that’s a pretty fair exchange, and demonstrates the developer’s confidence in its product. Making up your own mind about the game is enjoyable, and spend-safe.
open_in_newRead full review

6.00
Shaun Musgrave—Jan 30, 2015
In the end, I'm not sure who Blood Brothers 2 is really going to resonate with. The dramatic changes in art style and game mechanics are probably going to leave the many fans of the first game scratching their heads, but nothing the game does seems all that likely to pull in anyone else.
open_in_newRead full review
See all critic reviewsarrow_forward