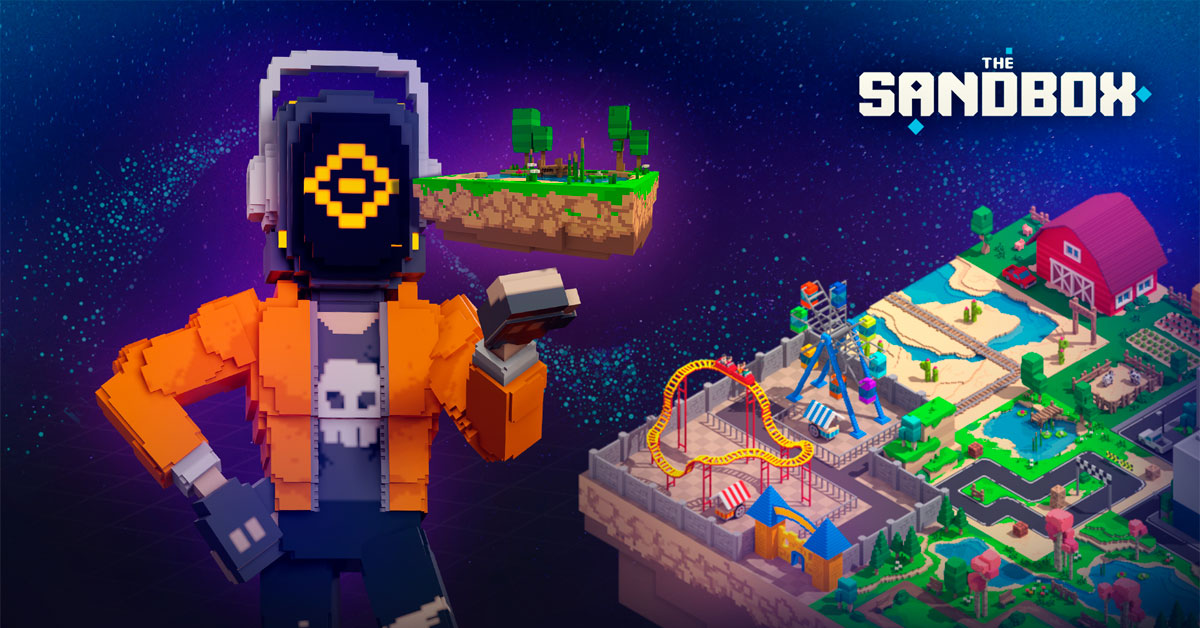 Since its release in 2012, The Sandbox franchise has grown into one of the biggest user-generated content and gaming platforms. It boasts millions of creations and hundreds of thousands of users. Building on these successes, a new TSB game is coming soon. Voxels replace pixels and with the integration of blockchain technology, users can now monetize their works.

In our interview with Nathan Sexer, Head of Growth and Marketing at The Sandbox, we talk about tokenization of digital currency, how monetization works, policing copyrighted materials, and more. Read on to find out more.

The Sandbox Evolution still has an active playerbase. With this new decentralized gaming ecosystem, how will support for Evolution continue? Are there migration paths for those who want to move from Evolution to The Sandbox?

We still have a quite large and active community around The Sandbox Evolution, which has been live for many years now. The main difference with our new game The Sandbox is the shift to a multiplayer game, in 3D, multi-platforms, with an engine based on blockchain technology. However, we aim at conserving many concepts that made The Sandbox Evolution so successful, especially by allowing any creator, artist or gamer to create almost anything in an interactive, user-friendly and esthetic voxel environment with unlimited possibilities. We think these concepts will make existing users come to The Sandbox for the same reasons they started playing with the mobile versions. To give even more reasons to our current player base to join the new version of The Sandbox, we thought of several migration paths and campaigns such as importing the most successful assets created in past games, as well as universes or even gameplays.

What can gamers, who know nothing of blockchain technology, expect from The Sandbox?

Regardless of the blockchain technology, we aim at building great games and enable anyone to do so. The Sandbox uses blockchain and non-fungible tokens (NFTs) for specific use-cases in the platform: not knowing much about it will not prevent them from having great in-game experiences. Furthermore, we offer a wide range of services and tools, including a voxel creation software (VoxEdit), a marketplace for in-game assets (our dashboard) and visual scripting tools to create games (our GameMaker) that will bring many benefits for lots of gamers, without even mentioning blockchain. It is true that gamers who understand, even superficially, what blockchain does, will get a better sense of the innovative mechanisms that it allows: true ownership of their game assets interoperability, monetization to name only a few. It’s also interesting to note that most players already understand many concepts inherent to blockchain technologies such as digital currencies (World of Warcraft’s gold or Fortnite’s V-Bucks), P2P technologies like torrents etc. Using our currency (SAND tokens) will not be different from using any of these digital currencies, except it benefits from Ethereum tremendous benefits.

One of our end goals is also to convert gamers into blockchain enthusiasts, but we believe they will do it by themselves, giving enough time and realizing underlying benefits of the technology. We are already seeing success in this strategy on onboarding users to blockchain as we are seeing the Artists part of our Creators Fund install a web3 wallet and grow interest in owning SAND and LANDs, the main tokens of The Sandbox platform.

We’re excited by the opportunity of building a new kind of business model that creates a fair reward mechanism for players, making them stakeholders in the success of the platform they are engaging with.

There’s a suite of tools creators can use to build game assets and experiences on the platform. It won’t be surprising to see millions of them. How do you plan to make discovery of these creations fair for both hobbyists and professionals?

Through our 3D voxel editor “VoxEdit”, creators already built hundreds of Voxel models that will soon be accessible to thousands of players (see sandbox.game/shop) and animate them as well. Depending on past actions (ie. likes, assets bought, games played etc.) we will recommend them specific games and assets that have similar attributes or characteristics. In addition to this, we are building The Sandbox as a community-driven platform: we plan to include governance mechanisms where users will be incentivized to curate assets and games according to their own criterias etc. With blockchain technology, staking (tokens) can enforce such mechanisms to be fair by allowing players to put their “skin in the game”; being rewarded when acting according to the rules, slashed when behaving maliciously.

What steps are in place to deal with copyrighted materials being published on the platform?

As an open user-generated content platform, we expose ourselves to all kind of content and need a way to enforce the quality of our marketplace and protect vulnerable users. Furthermore, as scarcity is a core component that no traditional platform can provide, we should ensure creators can’t simply copy previous works from other or themselves without prior agreement.

This is why we have designed a system where creators can be punished if they don’t respect the rules set forward by the community itself.

Any user who can put their SAND token at stake can be a Curator.It works via a Staking mechanism based on prediction markets to ensure the platform is curated by the community. We improved on the proposal from Vitalik Buterin by moving most of the operation off-chain, allowing us to provide a nice user experience.

By allowing users to report any content that represent a threat and potentially benefiting from this activity while punishing the infringers, we are encouraging positive behaviors and incentivizing community-driven aspect of our platform. Users will become moderators.

Moreover, TheSandbox team has a long experience in working with Brands and IPs. We had collaborations in The Sandbox Evolution with PAC-MAN, The Invincibles or Shrek in the past for example. We are interested in pursuing these types of collaborations and enabling IPs to showcase their characters and worlds within The Sandbox Metaverse and encourage promoting their content as non-fungible tokens, to enable any Creators to use their characters and content for making their own gaming experiences featuring these IPs. This is a very exciting vision and we are already working in this direction with key partners.

What is TSB Gaming’s guiding principle when it comes to balancing between monetization and building a transparent, community-driven platform?

Blockchain technology (Ethereum) is at the core of all these elements. In our view, building strong monetization mechanisms will make our platform truly community-driven. Through the tokenization of digital currency (ie. our SAND tokens), we allow our users to monetize their experience: for artists to earn money by selling their assets created, game developers and creators to monetize their games etc. SAND will be a liquid asset (token) that users will be able to sell without our consent. SAND is an ERC-20 token, which means that it lies on a public blockchain (Ethereum), benefiting from all its characteristics (censorship resistant, transparent, permissionless and more). Incentivizing our users in creating, buying, selling, voting, playing though tokens enables de facto transparent monetization mechanisms that will allow our platform to be driven by our community.

The Sandbox is being built to last for years. How do you foresee its future with progress in technology (processing power, connectivity, crypto space, etc.)?

Blockchain needs good games that are fun to enjoy immediately.

Part of The Sandbox’s future is about educating users (artists, gamers and creators) to the blockchain. The blockchain space and technology will become more and more popular in the years to come, as governments, companies and individuals keep adopting it at a very fast pace. We believe that the gaming industry is a breeding ground for blockchain development: gamers are known to be tech-savvy, adventurous, curious and mostly geeky. Which are all common characteristics of crypto-enthusiasts. We hope that our core blockchain components (Token economy, web3 integrations etc.) that seem to be at the (cutting) edge of gaming technologies today will be mainstream tomorrow, and we are working hard at it. For instance, we’re working hands in hands with other blockchain gaming companies and associations to set standards in the industry (eg. we are one of the top 3 contributors to the ERC-1155 standard together with Enjin and Horizon Games; Blockchain Gaming Alliance etc.)

We are also leveraging the latest Unity technologies (DOTS, ECS) in order to offer the most performant and multi-platform game builder.

In a nutshell, we want to be pioneers in bringing the blockchain to anyone through entertainment. And that goes with building a great game first, for gamers to realize by themselves what benefits can the blockchain bring.

You are among the top proponents of integrating blockchain technology into gaming. What do you think is needed before we see mass adoption?

Blockchain needs good games that are fun to enjoy immediately. Who ever reads the User Manual? We think that games should be made as accessible as possible for anyone to enjoy, both the (hyper) casual users to the most advanced tech-savvy users. If we compare blockchain games to traditional games (console or mobile free-to-play), we often forget how easy it is to play these games and players seldom read instructions before entering the game and deciding if they enjoy it or not. Reading a lot of texts isn’t part of the fun.

..we want to be pioneers in bringing the blockchain to anyone through entertainment

While The Sandbox uses blockchain technology only to validate the ownership of the tokenized game contents, the whole gameplay remains off-chain and hence we are less likely to encounter scalability issues. Nevertheless, for a large amount of projects, before we see mass adoption of *public blockchain technologies* in general, some technological improvements needs to be made at the base layer for them to become capable of supporting traffic at scale. On most public blockchains like Ethereum, this is one of the main current concerns, and lots of efforts are in progress to solve those scaling issues, without sacrificing the three key aspects of blockchain technology (ie. blockchain trilemma: decentralization/throughput/security). Lots of solutions already exist like Matic or Loom, some of which are designed specifically for decentralized gaming applications. Plus, the amount of ongoing research in the field is astonishing (eg. Ethereum 2.0 = Ethereum at scale, is expected to launch in 2020). We need to see more of those initiatives and projects. And those to be more robust.

Specifically to the gaming industry, I believe that we are all waiting for AAA games to be integrated with blockchain technology as they are the entree doors to billions into the blockchain space. Once the biggest technological and regulatory hurdles will be overcame, mass adoption will come.