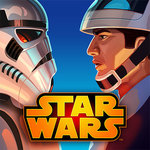 Sep 18, 2014
NA
playscore
To get a playcore, a minimum of 50 gamer ratings and 2 critic reviews are required.
9.00
gamerscore
person
1.03M
NA
criticscore
rate_review
1

Charge into battle on distant planets, and lead your troops to victory in this action-packed, combat strategy game! Build a base, recruit an unstoppable force, and challenge players across the Star Wars universe in Star Wars™: Commander!

During a time of Galactic Civil War, competing forces need allies for their cause. The Rebellion rallies for justice and freedom, while the Empire seeks control of the galaxy. Where does your allegiance lie? Will you side with the Empire’s strength and relentlessness, or the Rebellion’s heroism and resourcefulness? The choice is yours!

Game Faqs open_in_new
15 Ratings
7.06
This game has not been reviewed. Be the first to review it!

8.30
Janel Torkington—Sep 19, 2014
Awesome: you can choose your side, fighting for either the Rebellion or the Empire. Double awesome: fight with (or against) friends and random players. Triple awesome: an unfolding storyline that includes many of your favorite Star Wars elements and characters. The only un-awesome thing: a system built to penalize you with either time restraints or rampant IAPs.