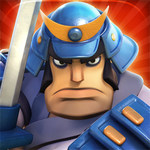 Samurai Siege is a fun multiplayer combat strategy game. Defend your village against hordes of enemy ninjas, samurai, and creatures! Explore a mystical world as you battle through lush forests, snowy mountains, and deserts. Fight other players from around the world to capture loot and steal rare items. Or join forces with other players to create the most powerful Alliance! Wage war with other alliances and compete to dominate the realm.

Game Faqs open_in_new
2 Ratings
5.00
This game has not been reviewed. Be the first to review it!

6.00
John Anthony—Oct 18, 2013
Samurai Siege has a lot of competition, and its creativity in terms of setting and unit/building design definitely gives it a bit of an edge. The technical flaws cut that edge down in size, however, impairing your ability to sit down and become absorbed by the game. It’s not unplayable by any means, but some errors are just too frustrating to overlook.
open_in_newRead full review

7.50
Allan Curtis—Oct 22, 2013
Soundwise, SS fares somewhat better. A large amount of peaceful period music and birdsong companies the action and sound effects are pleasing. Battles are a bit too quiet however. Samurai Siege is an enjoyable game with a few interface problems that get in the way of the fun. If you enjoy city buildings or just nice, tactical games you’ll surely enjoy Samurai Siege.

7.30
Anna Grace—Apr 16, 2014
Graphics are excellent, and so are the controls and design of the interface, even if originality isn't present within the gameplay. ...a defense strategy app for fans of the genre. Keep in mind that you'll need a powerful device for an optimal performance.
See all critic reviewsarrow_forward

The Battle of Polytopia